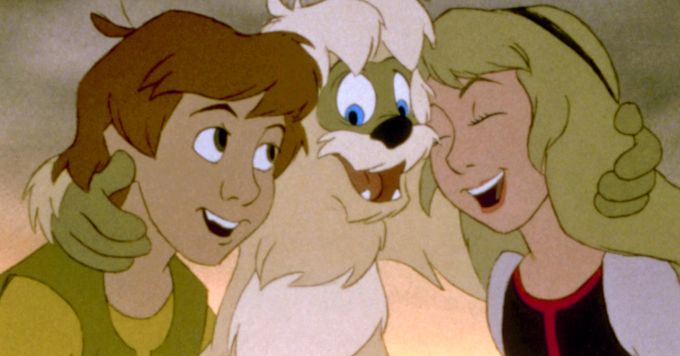 This movie is terrible but the stories that came out of it are beyond delicious. More than ten years in the making (the rights were first optioned in 1971 and Disney reacquired the rights last year), The Black Cauldron was the first Walt Disney animated film to feature computer-generated imagery, the first to have a Dolby Digital soundtrack, the first to be rated PG and the first to extensively use 70mm since Sleeping Beauty in 1979.

It was the nadir of the post-Walt period; the production was wasteful, exorbitant and creatively unfocused. And that was before Roy Disney, Walt’s nephew and a key board member, saw a rough cut of the film and was horrified by what he saw as excessive violence. He suggested trimming bloody sequences but according to James Stewart’s Disney War, confessed to producer Joe Hale, “I just don’t understand the story.”

But that was nothing compared with the reaction it elicited in Jeffrey Katzenberg, the newly installed head of animation who had followed Michael Eisner from Paramount. “This has to be edited,” he proclaimed. “Animated films can’t be edited,” Hale informed him. Katzenberg stormed into the editing room and had to be talked out by Eisner, who informed him that Roy could handle the situation. The movie was postponed a year, with more of the objectionable material taken out and additional dialogue recorded. When Roy appeared on The Today Show and was asked what the movie was, he couldn’t say. When the film finally opened, it lost at the box office to The Care Bears Movie. The reign of Disney was official over. They had hit bottom. And watching the movie now, it doesn’t hold up any better. It’s still ugly and muddled, with simplistic designs (and this is after they had coaxed Milt Kahl out of retirement to do additional conceptualization).

John Hurt as The Horned King, though, is the stuff of nightmares and is easily one of the scariest (and most underutilized) Disney villains ever (there used to be a very creepy Audio Animatronic version of the character in Tokyo Disneyland – YouTube it). The Black Cauldron is a noble failure but that doesn’t make it any more interesting or watchable.